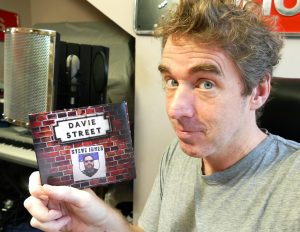 Hello, thinkers!  You’re quite right, Thinking Aloud has been somewhat quiet for the last couple of years.  I’ve been co-writing a bunch of new material for my duo The Aeon Wanderers, with Andrea Kremer, for a new album due to release in spring 2020, but also recording and producing ten of the eleven tracks on Steve Jones‘s new solo album, “Davie Street”.  Steve and I have worked together before – our joint project So? released the album “Shiny Objects” in 2014, and some TA sounds can be found on Steve’s earlier solo albums, Pictures and Clear Blue Sky.

In addition to the music production, I also had a hand in the album artwork, via Shake & Howdy, and produced the video for the album’s title track.  So yes – a little bit busy! 😉